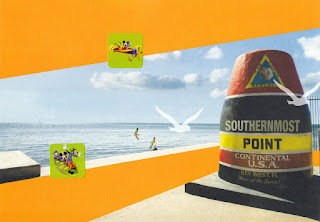 Outgoing postcard US-3917425 to Taiwan shows the Southernmost Point Buoy in Key West, Florida. On the buoy, it claims "90 miles to Cuba" although Cuba is actually 94 statute or 81 nautical miles due south at its closest point. Nonetheless, none of the US Presidents had visited Cuba since President Calvin Coolidge's visit in 1928.

Barack Obama made history as the first sitting U.S. president to set foot in Cuba in 88 years, ending decades of hostility between the two countries and marking an historic moment of reconciliation.

Some US business leaders and entrepreneurs, such as Ursula Burns, CEO of Xerox, Brian Chesky, president and founder of Air BnB/PAGE, Daniel Schulman, CEO of PayPal, Ken Siegel, general counsel, Starwood, and Arne Sorenson, president and CEO of Marriott, were aboard Air Force One with Obamas to attend the entrepreneurship event in Havana.

As USPS resumed mail service to Cuba on March 17, 2016,  it was the first time in more than 50 years for the people in the US to be able to send direct mail to the island nation. Hopefully, we will see some official PostCrossing postcards from Cuba soon.