No New Flag For New Zealand 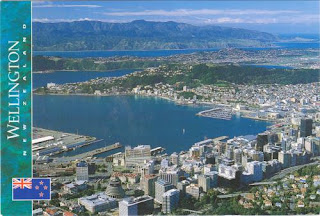 The national flag of New Zealand, shown on the lower left corner of postcard NZ-96168 of Wellington, the capital of New Zealand, is a defaced British Blue Ensign with the Union Flag in the canton, and four red stars with white borders to the right whose pattern represents the asterism within the constellation of Crux, the Southern Cross.

However, there has been on-going debates about changing the national flag for several decades, mainly because:


The most recent effort, led by Prime Minister John Key, resulted in a two-stage binding referendum on a flag change in 2015 and 2016. When voting on the second final stage closed on March 24, 2016, voters chose to retain the current flag by 56.6% to 43.2%. John Key has to defend his position as critics accuse him of wasting 26 million New Zealand dollars and dividing country.
Posted by twimbk at 11:45 PM