Survival against the Odds 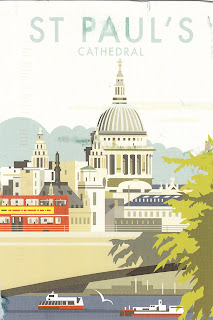 Postcard GB-749952 from the United Kingdom shows an illustration of St Paul's Cathedral by Dave Thompson,

St Paul's Cathedral, an Anglican cathedral, sits on the highest point of Ludgate Hill in London., originally founded in AD 604. The present English Baroque style church from the late 17th century, is one of the most famous and most recognizable landmarks in London. At a height of 365 feet  or 111 meters, it was once the tallest building in London between 1710 and 1962. It held peace services for the ending of World War I and World War II.

The card came with one of the eight stamps from Great Britain’s Royal Mail, honoring Ernest Shackleton’s survival story against the odds during his Imperial Trans-Antarctic Expedition from 1914 to 1916.  The stamp depicts the crew Striving to Free Endurance from the ice in February, 1915, 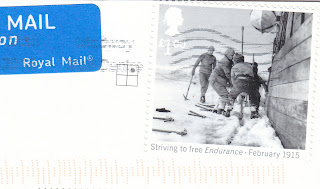 The cathedral itself was also a survivor of the Blitz, a period of strategic bombing of the United Kingdom by Nazi Germany during World War II between October 1940 and April 1941.
Posted by twimbk at 3:25 PM