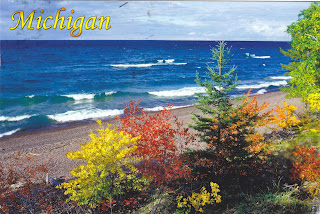 Democratic Presidential candidate Bernie Sanders was a surprise winner of the Michigan primary last night on May 8, 2016, edging over Hillary Clinton, 50 percent to 48 percent. Polling data showed that Clinton once had as much as 20 percentage points advantage a month before the primary. His victory in Michigan not only gave him a boost for his campaign to become more competitive in Illinois and Ohio on March 15, 2016, but also offered a proof that he could win states far more diverse than Iowa or New Hampshire.

Postcard US-3868817 from Michigan reveals a beautiful autumn scene on the beach.
Posted by twimbk at 7:18 PM