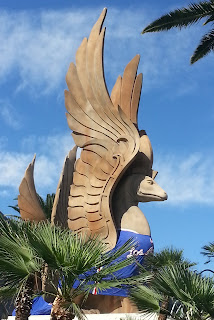 Outgoing postcard US-3841691 to the United Kingdom shows the statue of mythical creature at the Mandalay Bay Hotel on October 16, 2014, wearing a Los Angeles Clipper jersey No. 32 which belongs to Blake Austin Griffin. Before playing for the Los Angeles Clippers, Blake Griffin played college basketball for the Oklahoma Sooners. Born March 16, 1989, he turns 27 today.

On Oct 30, 2014, the Clippers managed to hold off the Oklahoma City Thunder 93-90 in a season-opening game, although it couldn't build more than a 10-point lead. Blake Griffin scored 23 points, and made two free throws with five seconds left to the game.
Posted by twimbk at 4:55 PM