25th Anniversary of the Fall of the Berlin Wall 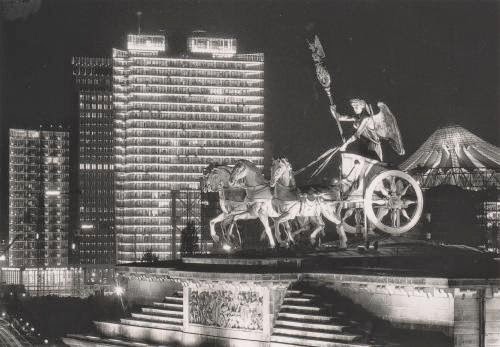 The Berlin Wall was a 96-mile or 155-kilometer barrier built in 1961 by East Germany that divided West Berlin from surrounding East Germany and from East Berlin,  preventing people from fleeing the communist East. Many people were killed when trying to scale the wall.

As the result, the Brandenburg Gate, an 18th-century neoclassical triumphal arch and a landmark in Berlin, became isolated and inaccessible because it was immediately next to the Berlin Wall.

On November 9, 1989, after a series of radical political changes which eroded the pro-Soviet influence and under months of protests, the East German government announced opened the border, which resulted in the collapse of the wall and paved the way for German reunification on October 3, 1990.

Postcard DE-1702613 from Germany shows the Brandenburg Gate, a site that witnessed many major historical events in Europe. 25 years after the Fall of the Berlin Wall,  it is once again the center for celebration and a symbol for unity and peace.
Posted by twimbk at 11:56 PM