We Grow'em Big in Idaho 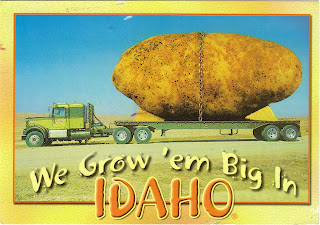 Idaho produces nearly 1/3 of all the potato for the United States. When I received postcard US-2359031 from Idaho, it still took a minute for me to wonder if you can grow potato this big. For the record, the Guinness Book of World Records listed the largest potato as 7 pounds 1 ounce by J. East (1953) and J. Busby (1982) from the United Kingdom. In 2010, that record was surpassed by Peter Glazebrook with one that weighted 8 pounds 4 ounce or 3.76 kg,

There is actually a Famous Idaho Potato Tour truck on the road, with scheduled stops in more than 50 cities in the US to raise awareness and funds for Meals on Wheels, a non-profit organization that aims to relieve senior hunger.

As for the question "Where is the World's largest ketchup bottle?" mentioned in the above YouTube video, the answer is Collinsville, IL, USA.
Posted by twimbk at 11:59 PM