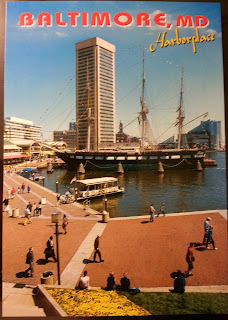 I flew into Washington D.C. via Baltimore/Washington International Thurgood Marshall Airport (BWI) earlier today. When I was at the airport. I picked up a postcard showing the USS Constellation at Baltimore's Inner Harbor in Maryland. Baltimore has been one of the major seaports in the United States since the 1700s. It has grown into the cultural center of Baltimore since the 1970s.

The Inner Harbor is home to four historic ships: the USS Constellation, a sloop-of-war from 1854; the USCGC. Taney, a Coast Guard cutter; a WWII-era submarine named the USS Torsk; and a lightship the Chesapeake.

USS Constellation, shown on the postcard, was the last all-sail ship built by the United States Navy. A sailing ship is usually referred to a wind-powered vessel. Among its early missions are disrupting the slave trade, and delivering famine relief supplies to Ireland.
Posted by twimbk at 8:30 PM