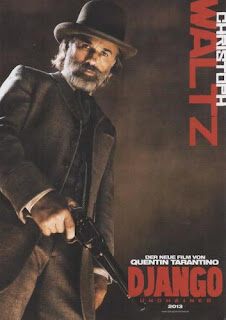 Postcard DE-2339136 from Germany was of the 2012 movie Django Unchained. A German bounty hunter and former dentist, Dr. King Schultz, played by Christoph Waltz, bought the freedom of a slave, Django, played by Jamie Foxx, with the intent to train him as his deputy bounty hunter. However, he was led to where Django's wife was under the control of Calvin Candie, played by Leonardo DiCaprio, a ruthless plantation owner.

You can rent the instant video or purchase a Blu-ray, DVD, Digital Copy, and UltraViolet combo from Amazon.
Posted by twimbk at 1:00 AM