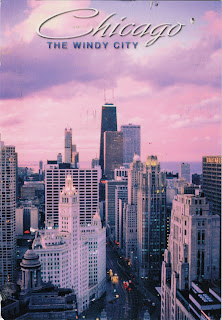 I just came back from a 3-day flash trip to Washington D.C. for the 50th Anniversary of March on Washington. I had a connection at the Chicago O'Hare International Airport (ORD) on August 27, 2013 on my way to the Baltimore/Washington International Thurgood Marshall Airport (BWI). 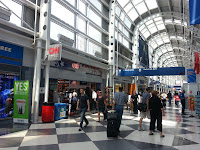 I found a CNN Newsstand store near Gate B6 that had Chicago postcards for sale. Since I had some stamps with me, I decided to post a postcard to myself. There was a USPS mailbox just down the duty free store next door. 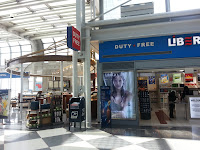 The postcard arrived today in Las Vegas bearing a postmark from Carol Stream, IL, a village next to ORD with a population of 40,438 as of the 2000 U.S. census. It was incorporated on January 5, 1959, and named after the developer's daughter.

You can find mailboxes in some other airports at airportmailboxes.com.
Posted by twimbk at 11:58 PM