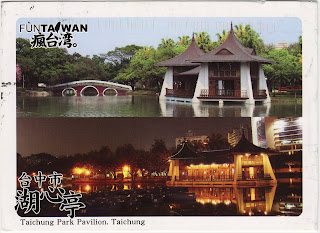 The postcard shows the Taichung Park Pavilion located in the middle of the Sun Moon Lake in the Taichung Park, a city historical site. The park was initially built during the Japanese occupation. It has a lot of historical buildings and monuments, including the "Victory against the Japanese Occupation Monument" built in 1947. It is also the location of the Taiwan Origin Reference Point (台灣地籍測量三角原點中心碑). In recent years, people have celebrated Lantern Festival in the park.
Posted by twimbk at 11:59 PM