The Parade is Coming 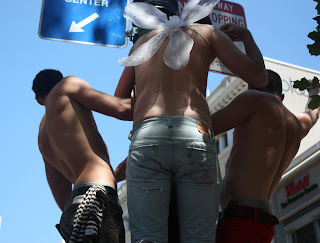 San Francisco's Pride Celebration and Parade is the largest LGBT gathering in the nation, taken place over the last weekend in June each year. About one million people attended the event last year in 2012. My postcard US-2246692 to Netherlands shows a group of young men climbing onto a pole in anticipation of the incoming parade on June 24, 2012.

In less than 12 hours, the 43rd annual San Francisco Pride Parade will start marching on the Market Street at 10:30 am on June 30, 2013. More people are expected this year due to the Supreme Court rulings last week. The theme for this year is "Embrace, Encourage, Empower". House Minority Leader Nancy Pelosi and other elected officials will be in the event.