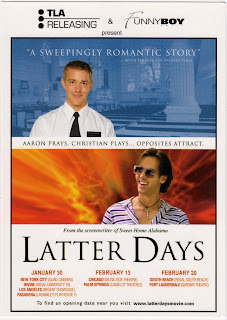 Thirty five years ago, the Church of Jesus Christ of Latter-day Saints (LDS) opens its priesthood to "all worthy men" on June 9, 1978, ending a 148-year-old policy of excluding black men. A line in the lyrics of "the Book of Mormon" alluded above event: "I believe that in 1978 God changed his mind about black people..."


I realized that I still had a couple of the advertising cards of the movie "Latter Days" from its screening at the Gateway Theatre in Fort Lauderdale on February 20, 2004. According to IMDB, the movie is about a promiscuous gay party animal who falls for a young Mormon missionary, leading to crisis, cliché, and catastrophe. You can watch Latter Days' official trailer on Youtube.


So, I hope some day the LDS church will recognize LGBT members are belong to "all worthy men", not someones who have mental diseases to be cured. Indeed, changes are in the air. Stephanie Mencimer from MotherJones had a pair articles on Mormon Church Abandons Its Crusade Against Gay Marriage, and How the Mormons Ensured Victory for Gay Marriage. Recently, LDS Church accepted new Boy Scout policy on gay members.

I bought a copy of the Latter Days movie when it was out in DVDs. I feel It still resonate with anyone who has ever fallen in love when I watched it again after all these years. Now you can own a copy in Blu-ray from Amazon.
Posted by twimbk at 11:58 PM