From Greenwich Village to Golden Gate: a Journey of 44 Years 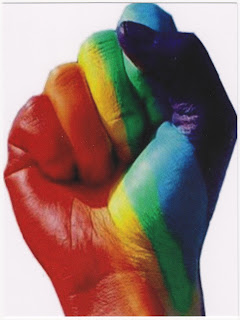 Today is the 44th anniversary of the Stonewall Riots that members of gay community protested against police raids at the Stonewall Inn in the Greenwich Village, New York City, in the early morning of June 28, 1969, It marked the beginning of the modern fight for LGBT rights in the United States.

Same-sex marriage resumed today in California after a federal appeals court lifted a hold on the lower-court ruling that struck down the state’s Proposition 8 ban on gay marriage, followed a US Supreme Court decision two days earlier.

This rainbow fist postcard symbolizes a 44-year's journey of struggle with determination, highlighted by the above bookend-like events. The postcard was purchased at Zazzle.com.
Posted by twimbk at 11:43 PM