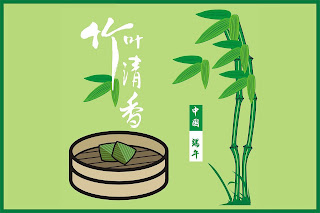 Duanwu Festival, also known as Dragon Boat Festival, is a traditional and statutory holiday originated in China, celebrated on the 5th day of the 5th month of the Lunisolar Calendar. The date varies on the Gregorian calendar; it happens to be June 12 in 2013.

Duanwu Festival is to commemorate Qu Yuan, a great Chinese poet from 343–278 BCE. He committed ritual suicide in a river as a form of protest against the corruption of the era. Popular legends state that villagers rushed their boats to the river and tried to save him. When that was too late, they dropped rice dumplings to the river in order to keep fish and evil spirits away from his body. Gradually, it became traditions for people to eat Zongzi, rice balls wrapped in reed leaves, and to race dragon boats on the  anniversary of his death.
Posted by twimbk at 11:57 PM