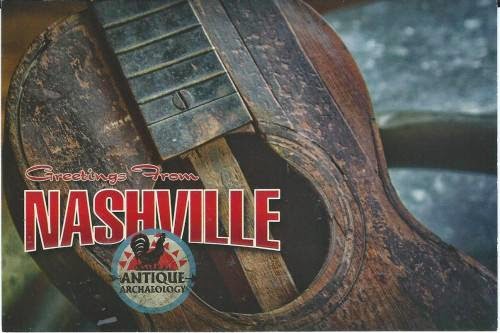 Postcard US-3064194 from Michigan, USA was a "Greetings from Nashville", Tennessee card that highlights its nickname "Music City" with an antique guitar. As the capital of the state of Tennessee, Nashville is located on the Cumberland River in the north-central part of the state, serving as a center for the music, healthcare, publishing, banking and transportation industries. It also has a large number of colleges and universities.

Today, the United States Supreme Court agreed to hear the case Tanco v. Haslam, No. 14-562 from Tennessee challenging state laws barring the recognition of same-sex marriages performed outside the state. It was part of the consolidated cases in which the United States Court of Appeals for the Sixth Circuit upheld the bans on same-sex marriage in Kentucky, Michigan, Ohio and Tennessee. By granting petitions seeking review from plaintiffs challenging those bans in each state, the United States Supreme Court posed to decide once for all whether the Constitution requires states “to license a marriage between two people of the same sex” and whether states must “recognize a marriage between two people of the same sex when their marriage was lawfully licensed and performed out of state.” The Supreme Court's decision is due before the end of June. Governor Bill Haslam of Tennessee, a Republican, did what litigants who have won in the lower court usually do by urging the Supreme Court Justices not to hear the case.
Posted by twimbk at 11:33 PM