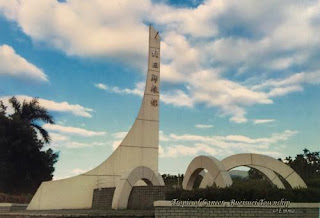 The Tropic of Cancer is the most northerly circle of latitude at 23.5ºN on the Earth that may have the Sun directly overhead at the time of the Northern solstice (夏至). In 2016, this "shadowless" effect occurs at noon local time on June 20 at 23.43715°N when the Northern Hemisphere is tilted toward the Sun to its maximum extent.

The.Tropic of Cancer Monument was originally placed to the west of Rueisuei Train Station in 1933. It was relocated to to the Wuhe (舞鶴) Terrace on Provincial Highway No.9 in 1981 due to expansion of the Eastern Line Railway. However, the new location is actually two kilometers south of the Tropic of Cancer.