In Search of Sunrise 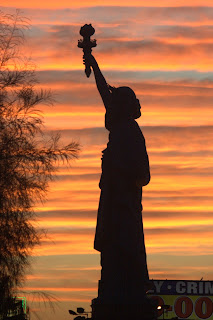 An ancient Chinese legend has a giant tribal chief named Kua Fu (夸父) who believed that he would bring back truth and prosperity if he could catch the Sun. So, one day in the morning he started race to the Sun in full speed as soon as he saw the sunrise. At the end of the day, Kua Fu got too close to the Sun and became dehydrated. He was so thirsty that he drank up all the water from the Yellow River (黃河) and the Wei River (渭河) but it was still not enough. Tried but failed to reach the Big Lake in the north, Kua Fu died from the heat exhaustion before he could get there. Kua Fu dropped his cane as he fell down. And the cane had turned into a grove of peach trees, providing protection from the Sun for those who came through afterwards.

Usually a late night person or a night owl, I did a project In Search of Sunrise, filming the sunrise every day for three months last year. The experience was transforming. The card was made from one of the photos taken during the first day on September 30, 2015. It features an unassuming replica of the Statue of Liberty in a neighborhood shopping mall.