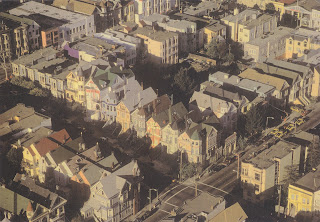 Postcard US-4032025 to Germany shows an aerial view of  "Painted Ladies," a term in American architecture used for Victorian and Edwardian houses and buildings painted in three or more colors that embellish or enhance their architectural details. The card is one of those from Above San Francisco postcard book.