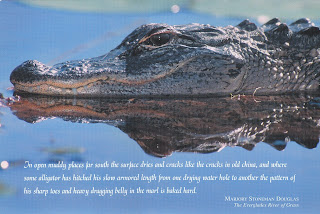 A private swap to Pennsylvania shows a card produced by SFWMD. It reads on the back: "The broad-snouted American alligator navigates freely through rivers and lakes in southern Florida. Remnants of a prehistoric ear, alligators are a protected species that continues to flourish." The number of alligators living in Florida is estimated at 1.3 million. Central to state's identity, it was featured on  a 32-cent commemorative stamp, issued in Tallahassee, Florida on March 3, 1995, to celebrate the 150th anniversary of Florida Statehood. 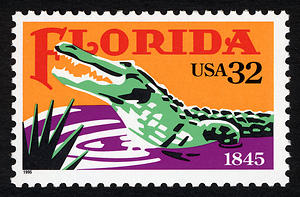 Although alligator attacks are rare, properties at Walt Disney World are adding signs warning "Alligators and snakes in area" at their beaches after an alligator dragged a 2-year-old boy from Nebraska to his death in a lagoon near the Grand Floridian Resort & Spa on June 14, 2016. At the time of incident, only "No Swimming" signs were posted without any specific reference to alligators.


Embed from Getty Images
Posted by twimbk at 11:42 PM