The 4th of July and Thomas Jefferson Memorial 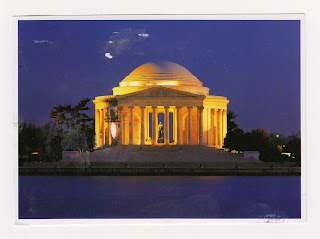 I received a postcard US-2282865 a few days before the Independence Day, 2013, the 237th anniversary of the adoption of the Declaration of Independence on July 4, 1776. It features the Thomas Jefferson Memorial, directly south to the White House, in Washington DC.

Thomas Jefferson, one of the American Founding Fathers, was the third President of the United States from 1801 to 1809. He was the principal author of the Declaration of Independence in 1776.

According to Wikipedia, Thomas Jefferson believed that each man has "certain inalienable rights". He defines the right of "liberty" by saying, "Rightful liberty is unobstructed action according to our will within limits drawn around us by the equal rights of others...". A proper government, for Jefferson, is one that not only prohibits individuals in society from infringing on the liberty of other individuals, but also restrains itself from diminishing individual liberty.

The U.S. Postal Service issued 100 million se-tenant Cherry Blossom Centennial Forever stamps (with one scene across two stamps) on March 24, 2012 showing cherry trees in full-bloom around the Tidal Basin. The Washington Monument on the left and the Jefferson Memorial on the right form the backdrop for the stamps.
Posted by twimbk at 12:08 PM