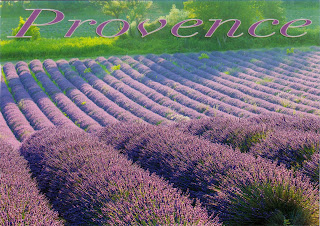 Today came a postcard FR-299464 from France. It shows a lavish Lavender field in Provence. Lavender is a genus of about 40 species of flowering plants in the mint family of Lamiaceae. It can be found in southern Europe, northern and eastern Africa, the Mediterranean, and southwest Asia. There are a lot Lavender fields in the South of France.

Lavender is grown mainly to produce Lavender oil in culinary and medical uses. There is even a color named after the shade of its flowers. The color transpires romantic feelings that mix love, sadness and hope. I had read several fictions using Lavender fields as backdrops.
Posted by twimbk at 11:57 PM