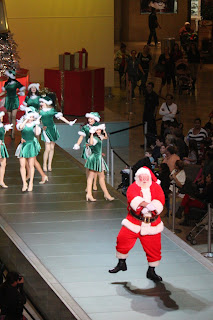 One year ago, South Korean K-pop musician Psy released his 18th single "Gangnam Style" (강남스타일) on July 15, 2012 and debuted at number one on South Korea's Gaon Chart. It gained popularity as it became the first Youtube video to surpass a billion viewings on December 21, 2012 and many different individuals and groups made cover videos or parodies and dance mobs attracted thousands of participants around the world. By July 15, 2013, "Gangnam Style" has been viewed over 1,742,800,200 times on YouTube.

The traveling postcard US-2246671 to China shows Santa Claus was dancing to the "Gangnam Style" at the Fashion Show Mall in Las Vegas on December 1, 2012.