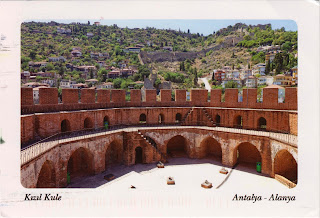 Yesterday, the post was about the "Red Village", Červená Lhota State Castle in Czech Republic. Today, I received a postcard TR-144061 from Turkey, featuring the battlement of the Kizil Kule ("Red Tower"). The Kızıl Kule a historical tower and symbol of the city in Alanya, Turkey, built in 1226.

Similar to the Červená Lhota State Castle, its name was also derived from the red color bricks used in the construction. The tower is a octagonal structure with 108 ft or 33 m height and 41 ft or 12.5 m width,  It has been used in the design of the city flag of Alanya, and on the back of a Turkish lira banknotes.
Posted by twimbk at 11:07 PM