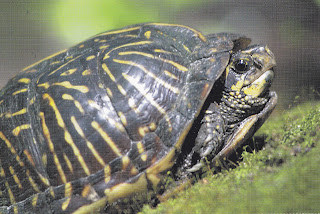 May 23rd has been the World Turtle Day since 2000. It was initiated by American Tortoise Rescue to celebrate and protect turtles and tortoises and their ever shrinking habitats around the world.

The postcard US-1532121 was issued by SFWMD, featuring a Florida box turtle living in moist woodlands and floodplains in the greater Everglades. Turtles are the only toothless reptiles, but have beaks with biting edges.

Before I moved to Las Vegas, NV from Florida in 2006, I was aware of the problem caused by street lights to the baby sea turtles during the hatchling season. Those baby sea turtles mistook street lights as the rising sun, so they moved towards city streets and were often crashed by cars, rather than headed to the ocean. I knew there were efforts to install turtle-friendly lights along A1A, a Florida State Road running mostly along the Atlantic Ocean. However, to my surprise, I found out the problem is still serious today. A Youtube video documented disoriented sea turtle hatchlings in Broward County Florida caused by illegal lighting in the summer of 2011. It was estimated that one in every three hatchlings had gone to the street lights instead of the ocean.


In Florida, sea turtles come ashore to nest from May to late October. You can learn how to help this season in 2013 by visiting their web site SeaTurtleOP.org.

What is the difference between a tortoise and a turtle since they are both reptiles from the family of Testudines? Tortoises dwell only on land while turtles can dwell well in the water. Therefore, in the Mojave Desert around Las Vegas, we only have tortoises.