Eiffel Tower, and the Replicas

I have been sending off quite a few Eiffel Tower postcards since I joined the PostCrossing, although they were of the replica in front of Paris Hotel in Las Vegas. Naturally, I was quite excited when I received a postcard (FR-287501) of the Eiffel Tower from Paris, France yesterday.

Coincidentally, France celebrates its first gay marriage yesterday, becoming the 14th country to legalize gay marriage,  after President François Hollande signed the country’s “Marriage for All” act into law on May 18, 2013.

More coincidentally, when Paris Hotel's owner Harrah's focused on marketing its properties to specific segments of the population to counter the 2008-2009 economic downturn, Paris was being marketed heavily towards gay and lesbian travelers, according to a Las Vegas Review Journal article "Executive Wants To Ensure Hotel Guests Get Social Cachet For Their Cash" posted on February 22, 2009. 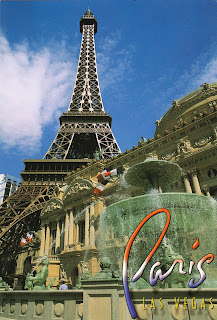 You can find postcards of the Las Vegas Eiffel Tower from many gift shops in Las Vegas. You can purchase a copy of the Eiffel Tower at Paris Las Vegas under a Full Moon from Zazzle.com.

If you have a postcard or a photo of the Eiffel Tower or one of the replicas around the world, can you send me a copy? I will return a postcard to you from Las Vegas and feature your card here.

Eiffel Tower replicas in the US:
Posted by twimbk at 1:00 AM