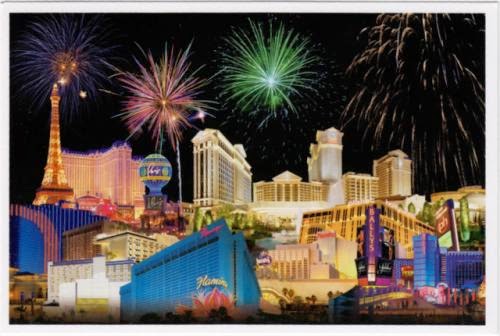 The countdown to 2015 is on, and LasVegas is expecting a record of 340,000 visitors in this New Year's Eve, despite of a forecast of freezing temperature and snow.

More than 80,000 fireworks will light up the night sky, shooting from the rooftops of MGM Grand,
Aria, Planet Hollywood, Caesars Palace, The Venetian, Treasure Island and Stratosphere, in a 7 minute and 11 second synchronized show.

Postcard US-3087107 to China shows a collage photo that includes many major landmark hotels and casinos in Las Vegas under the fireworks.

Update: The anticipated snow did not materialized. Only bursts of spectacular fireworks filled the sky, ushering in a brand new year.