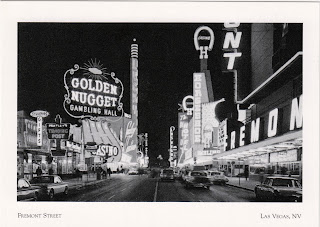 Postcard US-2545733 to Czech Republic shows the light of the neon reflects off the cars parked along the Fremont Street, adding to the feeling that it was never dark in downtown Las Vegas, even in its early years. From neon circles under the Fremont Hotel to the Indian head atop the Hotel Apache sign, Fremont Street is a destination 24 hours a day. At the end of the street, the neon sign for the train depot can be seen.
Posted by twimbk at 11:58 PM