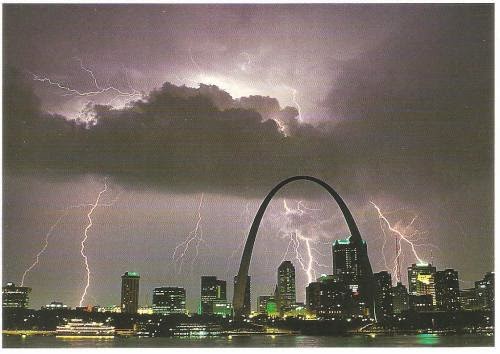 Postcard US-3064248 from Tennessee shows the city skyline of St. Louis, Missouri, featuring the Gateway Arch, a 630-foot or 192-meter monument built at the site of St. Louis' founding on the west bank of the Mississippi River between 1963 and 1965 to commemorate the westward expansion of the United States, against the backdrop of a flurry of cloud-to-ground bolts strike.

As the centerpiece of the Jefferson National Expansion Memorial, the arch is the tallest arch in the world and the tallest monument in the Western Hemisphere. The monument opened to the public on June 10, 1967. In comparison, the Stratosphere Tower in Las Vegas stands at 1,149 ft or 350.2 meters.

St. Louis, the second largest city in the state of Missouri, was the hometown of Maya Angelou (April 4, 1928 – May 28, 2014), an American author and civil rights activist. USPS issued a Forever stamp in her honor today, with Winfrey Oprah and Michelle Obama attending the stamp dedication ceremony in Washington D.C.

However, USPS failed the fact check for the stamp by featuring a quotation from another author, and had no plan to re-issue the stamp. Nonetheless, the mix-up did not damp the enthusiasm of the dedication ceremony. Even a power outage that also affected the White House and much of the D.C. area could not stop Oprah's speach.