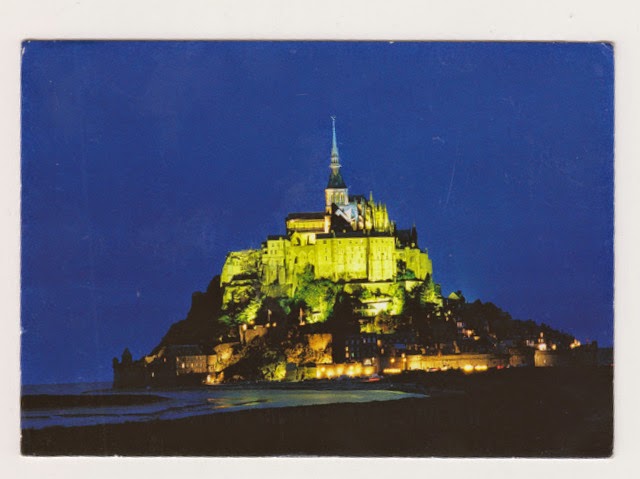 Postcard US-3133043 from Texas was a French postcard the sender collected during a trip to
Mont Saint-Michel in Normandy, France. Located 1 kilometer  or 0.6 miles off shore at the mouth of the Couesnon River, the tidal island is 100 hectares or 247 acres in size with only 44 official residents in 2009. However, as part of the UNESCO World Heritage Site, it has more than 3 million visitors each year.

Ten thousand visitors to the island got to see a supertide this Saturday on March 21, 2015, caused by the so-called supermoon effect coinciding with Friday’s total solar eclipse on March 20, 2015. Said to rise at the pace of a horse’s gallop, the unusual high tide turned the Mont briefly into an island fully surrounded by the English Channel Saturday. Normally, at a low tide visitors could walk on the vast flat seabed, while at high tide visitors could still travel to/from the mainland by a narrow causeway. The rare phenomenon supertide occurs every 18 years.

In Mount's Bay, Cornwall, United Kingdom, St Michael's Mount was a Cornish counterpart of Mont Saint-Michel in France, with the same tidal island characteristics and a similar conical shape,
Posted by twimbk at 11:30 PM