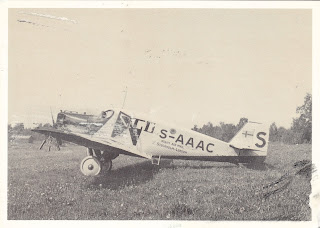 My recent received postcard SE-96903 from Sweden shows a Junkers F.13 aircraft, registered as S-AAAC and later as SE-AAC, which was used for the first flight between Stockholm and Helsinki on June 2, 1924 by AB Aerotransport (ABA), a Swedish airline that is part of the SAS Group today. The aircraft is now on display at the National Museum of Science and Technology in Stockholm.