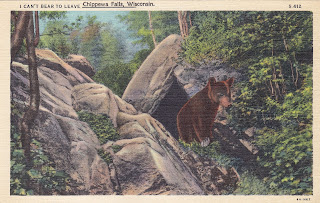 Outgoing postcard US-3935012 to Finland was a vintage linen postcard showing a bear in Chippewa Falls, Wisconsin.

All eyes on the April 5 Wisconsin primary Tuesday, with its 96 delegates up for grab on the Democratic side and 42 delegates on the Republican side. Bernie Sanders wins Wisconsin Democratic primary. It added to his momentum, but he still trails Clinton in delegate count. Republican Ted Cruz crushes Donald Trump, hoping that party will unite behind his campaign from now on and the future contests will lead to a rare contested convention.
Posted by twimbk at 11:59 PM